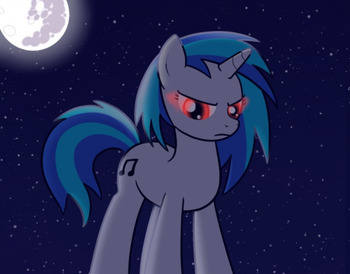 Ever wondered what being a vampire is like? Well, Melody definitely did not have any plans to discover it. Saved by another vampire, she found herself turned into one, and forced into the world of the night... Four hundred years pass, and now she goes under the name of Vinyl Scratch. But, her past does not seem to stay the past any longer...

and drawn by TerminusLucis aka "Gray"

from Chapters 1 to 26. After he had to leave due to personal reasons, Shuji Wakahisa

The comic has its own Patreon

and can also be read on deviantart

, where it has been broken up into several chapters: