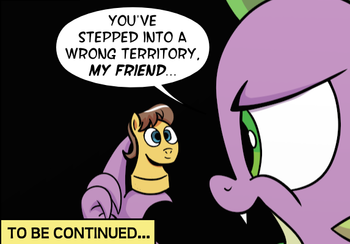 Spike is The Chessmaster in this comic series

An ongoing Fan Webcomic made by Pony-Berserker

based off My Little Pony: Friendship Is Magic, Age (In)appropriate follows Spike's misadventures as he tries to undermine every stallion Rarity shows interest in through a series of increasingly extreme means.

The comic's first page can be found here