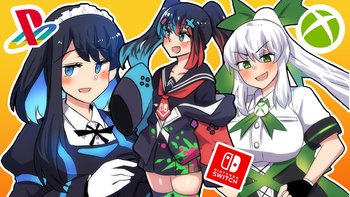 , in which various video game consoles and handheld devices during the 8th to 9th generation of the Console Wars are portrayed as cute anime girls. It basically serves as a Spin-Off to Merry's other webcomic, I Made A Comic About Internet Explorer with video game consoles.

, as well as on Webtoon under the Meme Girls banner.