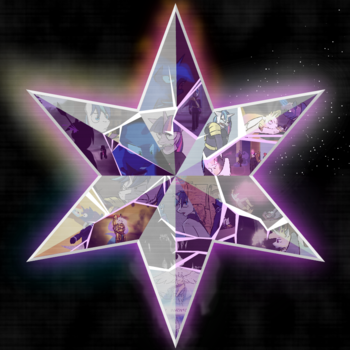 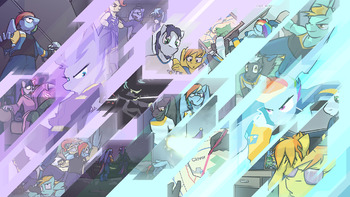 Agents of H.E.A.R.T. (Headquarters for Extraordinary Affairs and Risk Taskforce) is a My Little Pony: Friendship Is Magic fancomic written and drawn by Captain Hoers

, who also made Firestarter Spitfire

and a few others. The comic started out as an Ask Blog, but eventually dropped the gimmick in favor of simply telling a story, divided into (so far) two parts: Plane Sailing and Chasing Shadows.

Plane Sailing starts of with the Mane 6 (or rather five, for reasons that will become clear) summoned to Celestia, who bears grim news: Twilight Sparkle is dead, killed in a construction accident. However, due to the many threats to Equestria that have come about recently, she and Luna have decided that Twilight is too important to die, and the mane 5, along with Luna, set out for Tartarus to recover Twilight and resurrect her. Meanwhile, Shining Armor realizes that something smells rotten around his sister's death and in the Afterlife, Twilight awakens to find five other figures that look exactly like her.

In Chasing Shadows, H.E.A.R.T. has been established to help the Elements of Harmony combat extraplanar threat. While training with the Wonderbolts in Canterlot, Rainbow Dash runs into an old friend, who acts rather strangely. Later that day, a smoke bomb goes of in the H.E.A.R.T. headquarters, and Rainbow runs to investigate, finding her friend in the process of ransacking the place.

Agents of H.E.A.R.T. can be read chronologically on tumblr

(use the sidebar to navigate between storyarcs). Note that parts of Plane Sailing requires Flash to work.

Agents of H.E.A.R.T. provides examples of the following tropes