Film / The Ghost and Mrs. Muir 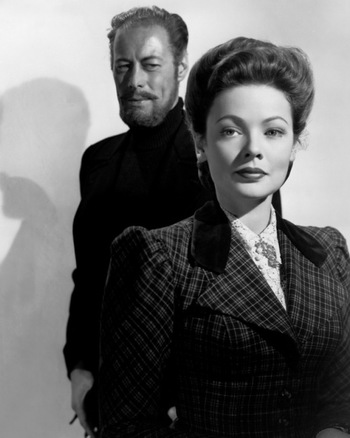 "You must make your own life amongst the living and, whether you meet fair winds or foul, find your own way to harbor in the end."
Advertisement:

The Ghost and Mrs. Muir is a romantic fantasy film released by 20th Century Fox in 1947, adapted from the 1945 novel The Ghost of Captain Gregg and Mrs. Muir by R. A. Dick (the pseudonym of Irish author Josephine Leslie), directed by Joseph L. Mankiewicz, and starring Rex Harrison and Gene Tierney. It's perhaps most notable for its lush music score, composed by Bernard Herrmann.

Lucy Muir (Tierney), newly widowed, has had it with her domineering in-laws and decides to settle the issue by moving herself, her daughter Anna (Natalie Wood), and her faithful maid Martha (Edna Best) to Whitecliff-by-the-Sea, a charming coastal village somewhere in Edwardian England. Gull Cottage, a beautiful if slightly run-down house on top of the bluffs, is for rent, and the asking price extraordinarily cheap. The agent, however, is none too keen about the idea of someone living in the house, and it is not too long after moving in that Lucy finds out why.

The late Captain Daniel Gregg (Harrison), the builder and former owner of the house, has not quite gotten around to moving out, despite being... dead. A cantankerous and blustery ghost, his attempts to move Lucy and her family out prove futile and short-lived, as he quickly falls in love with the beautiful widow, and she with him. Their cozy, if unusual, domestic arrangement is threatened when Lucy meets Miles Fairley (George Sanders), a suave author and veteran charmer. Fairley is interested, Daniel is jealous, and Lucy has a difficult decision to make.

The Ghost and Mrs. Muir is hard to categorize: part romance, part tragedy, part supernatural fantasy, part drama, part comedy. There's loads of room for Alternative Character Interpretation, but the plot is a permutation on a common story: boy meets girl, and they fall in love.

The film was loosely adapted into the 1968–70 Fantastic Comedy TV sitcom The Ghost & Mrs. Muir, shifting the setting to contemporary Maine. Edward Mulhare starred as Captain Gregg, with Hope Lange as his mortal love interest (renamed "Carolyn Muir"). Much was made of the comedic hijinks of Captain Gregg's surviving great-nephew, the venal and cowardly Claymore Gregg, played by Charles Nelson Reilly. Popular character actress Reta Shaw played the part of Martha.

Tropes used in The Ghost and Mrs. Muir include: