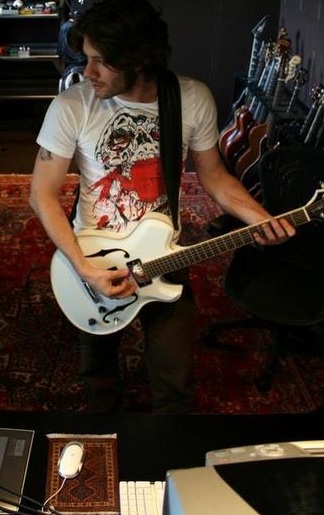 "I should vandalize this after I'm done recording..."
Advertisement:

Previously involved in ill fated solo projects Big Dumb Face (with his brother Scott Borland, which put out an album that sounded like it was written after listening to nothing but Ween), Eat the Day, and The Damning Well, Borland started BLB after leaving Limp Bizkit for a second time in 2005. Assuming multiple instrumental duties (guitar, bass, keyboards, percussion) and taking over vocals, he began to write a solo album, enlisting Danny Lohner, Charlie Clouser, Josh Freese, and Josh Eustis of Telefon Tel Aviv as contributors. The resulting album: Cruel Melody, was released in 2007 and received good reviews. Borland then assembled a new lineup for touring.

During a break in touring, the new lineup released an album of covers and instrumental B-sides, Cover Your Heart and the Anvil Pants Odyssey. The album came with a DVD that included a tour documentary and the music videos for "Mesopotamia," "4 Walls," and "Lie."

The band is currently on hiatus due to Borland rejoining Limp Bizkit, but he announced in February 2012 that the second album: The Moment You Realise You're Going to Fall, will be released in September - October through the Rocket Science Ventures/THC:Music/RED label.