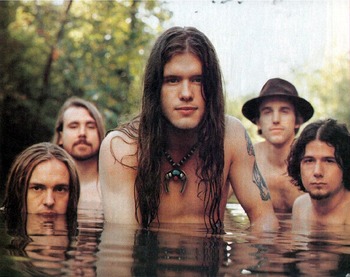 Blind Melon is an Alternative Rock band formed in Los Angeles, California. It was formed by guitarist Rogers Stevens, bassist Brad Smith, drummer Glen Graham, rhythm guitarist Christopher Thorn, and vocalist Shannon Hoon. The band was active from its inception in 1990 to Shannon Hoon's death in 1995. After Hoon's death, the band went on hiatus before officially disbanding in 1999. In 2006, they reformed with a new singer, Travis Warren, with whom they have toured and written a new album. Their biggest hit was "No Rain