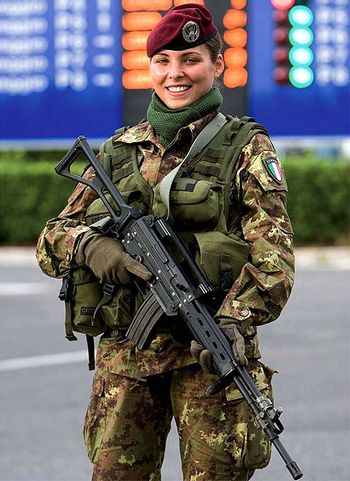 The military of modern day Italy.

Italy has had a mixed record on warfare since its unification. While they did a good job during the Crimean War (1856) and in Libya, defeating the Ottomans during the Turkish-Italian War (1911) — where the first aerial bombing in history took place — the Italians had been humiliated during the ambush at Adowa (1896) note  during which 40,000 Ethiopians, armed with a few modern guns courtesy of France and Russia, ambushed the 18,000-men-strong Expeditionary Force and cut it down to the last man... not unlike the Little Big Horn., in what was then Abyssinia, a loss they would later avenge in 1936 under the rule of Mussolini.

Italy won WWI or, at least, won on its front by defeating Austria-Hungary, completely destroying its army and that of its German ally after three years (1915-1918) of bloody fighting over the Alpine arch; this triggered the collapse of the multi-ethnic Austrian-Hungarian Empire.

However, the country — due to a combination of factors such as lack of resources, scarce industrial production, inadequate equipment, poor training, inept officers, poor logistics and coordination, mutual distrust between allies and... fighting a war it didn't want against an ex-ally it didn't want to fight, all while being forcibly allied to Germany (which most Italians despised) — did not, as you may have guessed, fare so well in World War II; it was occupied by both the Germans and the Allies, lost all its overseas possessions and some of its north-eastern territories. In the wars aftermath, the country was kept largely demilitarized until the early-50s, when the intensifying Cold War prompted NATO to permit it to rearm.

Nowadays, Italy's military consists of the standard features — namely, an Army (Esercito), a Navy (Marina Militare), an Air Force (Aeronautica Militare) and the Carabinieri, military police who also do domestic law enforcement. Italy is a NATO member and its forces have seen combat action in Lebanon, Somalia, Rwanda, Iraq, Afghanistan and Libya.

Due their historical and current engagements, Italian armed forces also have a well-deserved reputation for Combat Pragmatism, born from such things as inventing aerial bombing back when dropping bombs from aircraft had been preventively declared a war crime (the declaration specified from balloons. The Italians used planes), strapping torpedoes to commercial speedboats and sending them into enemy harbours to sink battleships, developing the Human torpedo

to complement and replace the aforementioned vessels (which had proven useful against Austria-Hungary, but had become obsolete by the time of World War II), as well as still fielding and using man-portable flamethrowers. In spite of this, they have managed to earn and keep a reputation as 'nice guys' when deployed for peace-keeping missions, mostly by honestly policing and bringing food and useful things to the civilians living in the areas they control.

Italy has eight police forces, but...

...we'll only see those with military relevance (the State and Jail Police have been demilitarised in 1981 and 1990).

...can you say "Interservice Rivalry" and "Jurisdiction Friction"?

Special Forces of the Italian Army

Besides "ordinary" infantry, the Army has a few special corps:

Special Forces of the Italian Navy

Equipment of the Italian Army

- Beretta AR70/90, standard-issue assault rifle, now being the replaced by the ARX-160.

- OD-82 — grenade. And a highly controversial model, at that.

- B1 Centauro, Tank Destroyer (actually a reconnaissance vehicle which just happens to have the firepower of a MBT, and can pull double duty as a light tank. Copied by multiple armed forces around the world after proving its worth during peacekeeping missions in the 2000s).

- SIDAM 25, Self-Propelled AA weapon. Also known as "yet another relic of the Cold War the Army desperately needs to do away with".

Equipment of the Italian Navy/Air Force

- Cavour — another, newer, STOVL aircraft carrier (which will be equipped with F-35Bs "very soon").

- Tornado IDS, an aging ground-attack aircraft to be replaced by the fabled F-35.

- A-129 Mangusta ("Mongoose"), attack helicopter. The nickname's actually a contrived coincidence on the manufacturer's part, for a mongoose can kill a cobra...

- A few MQ-9 "Reaper", an Unmanned Aerial Vehicle Designed to Blow Talibans Up From the Comfort of Your Own Bunk.

The Air Force was also notorious for holding to the F-104 Starfighter (and fielding the Italian-designed F-104S version) for a long time in spite of the fighter having very poor reliability (indeed, the indigenous version was developed specifically to correct the reliability issues. Being faster and capable of acting both as interceptor and fighter-bomber were just bonus). The last F-104S has been retired in 2004, being replaced by the Eurofighter Typhoon.

Conscription and other amenities

Since 1846, conscription is mandatory for every able-bodied citizen... despite it having been suspended (not abolished!) in 2005.

And since 1999, women too are allowed serve in the Army — to the delight of an entire generation of drill instructors.

The Forze Armate in fiction:

The Polizia in fiction: