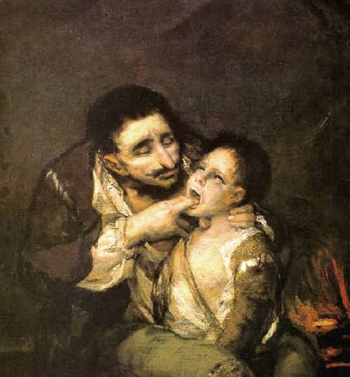 The Life of Lazarillo de Tormes and its fortunes and adversities (known as Lazarillo de Tormes for short) is an anonymous 16th-century Spanish novel, written in the first person and in epistolary style (as a single, long letter), whose earliest known editions date back to 1554. In it, the titular Lázaro de Tormes, who's an adult at the present, tells his life from his miserable childhood until his wedding in a message to another person. It's considered the precursor of the picaresque novel and one of the greatest inspirations of Charles Dickens' Oliver Twist.

Lazarillo de Tormes is an ironic and ruthless sketch of the society of the moment, showing its vices and hypocritical attitudes, especially those of clergymen and religious. There are different hypotheses about its authorship; the author was probably sympathetic to Erasmus ideas. This motivated the The Spanish Inquisition to prohibit it and, later, to allow its publication, once it was expunged.