Literature / The Land of Green Ginger 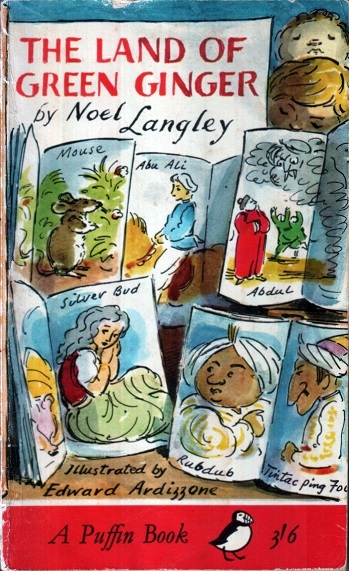 And now, if you are ready to begin, I bring you a Tale of Heroes and Villains, just as in Life; Birds and Beasts, just as in Zoos; Mysteries and Magic, just as in Daydreams; and the Wonderful Wanderings of an Enchanted Land which was never in the same place twice...
Advertisement:

The Land of Green Ginger is a children's book by the South African/American writer Noel Langley. It was first published as The Tale of the Land of Green Ginger in 1937, and was successful enough that it may have landed Langley his job working on the script The Wizard of Oz and hence helped launch his career as a screenwriter. It was revised with the shorter title in 1966, and that is probably the best-known and most popular version. An abridged version was published in 1975, and is widely hated by fans of the earlier edition, as it loses some of the jokes, one or two significant characters, and too much of the prose, which verges on the edge of Purple without ever quite falling in.

Some editions have illustrations by popular children's book artist Edward Ardizzone, which are another part of the book's charm. Its profile was raised in the UK in 1968 when it was read on Jackanory by Kenneth Williams (who could be just as lemony as the book's narrator).

The story is an early example of a modern sequel to a classic popular story, in this case that of Aladdin, asking what happened after the Happily Ever After ending. In this case, though, there's no attempt to subvert the original story; Aladdin remains Happily Married to his beloved Bedr-el-Budur and is now Emperor of China, and the story begins with the birth of their son. However, to the surprise of all present, the child starts talking soon after birth, and begins by saying that Aladdin's mother has a face like a Button-Nosed Tortoise. Aladdin consults the djinn of the lamp (from the original story), who realizes that the boy must be the Chosen One destined to break the unfortunate Spell of the Land of Green Ginger. And so, when the boy (who was also destined to be named Abu Ali) comes of age, he sets off on his adventure — which brings him romance, and also conflict with two rival princes, the Wicked Tintac Ping Foo of Persia and the equally Wicked Rubdub Ben Thud of Arabia. Langley clearly had a keen eye for tropes as well as that prose style, so the book, while aimed at children, is an immense pleasure for parents to read.

In which we bring you an Account of Tropes, Honored, Parodied, Invoked and Occasionally Subverted:

Alternative Title(s): The Tale Of The Land Of Green Ginger