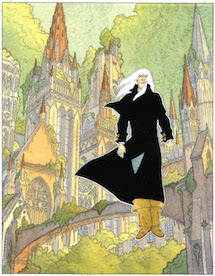 ”Everything that we are doing here is just a cheap mysticism”
Advertisement:

A semi-surreal, dieselpunk-ish comic book series written and drawn by German artist Andreas Martens. The story focuses on the enigmatic white-haired wizard Rork and his Verne-esque adventures. It started off as a collection of short stories originally serialized in the Belgian edition of Tintin magazine, then - after the magazine was cancelled - published as a graphic novel series in Le Lombard. After that, the comic began introducing a long term Story Arc, which included, among many other things, Eldritch Abominations, Lost Technologies, Starfish Aliens, Time Travels, Dimensional Travels and owls.

There are eight volumes in the Rork series: