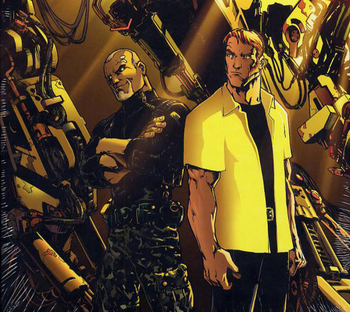 "For everybody else, Steve Travis is just the victim of an unfortunate turn of events. I, however, see him as an unexpected and, by definition, unpredictable agent of chaos."

The year is 2052, and the world is ruled by Megacorporations. Steve Travis is a freelance Space Trucker, using his shuttle to resupply various space stations. Unbeknownst to him, however, a bunch of terrorists led by nano-augmented killer Vlad Nyrki have been hiding in his cargo deck in order to infiltrate ''Huracán'', a weather-control satellite, where Travis is headed. Vlad has old scores to settle, but who is he really working for? And is Travis truly just a Right Man in the Wrong Place, or is there more to him than meets the eye?

15 volumes have been published between 1997 and 2019, divided into several story arcs: