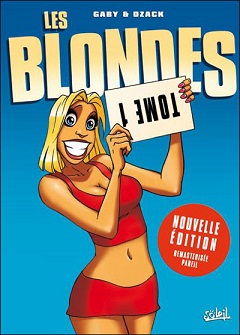 Les Blondes is a French comic written and drawn by Gaby and Dzack. As the name implies it is about Dumb Blondes.

The humour involves a lot of slapstick and wordplay based on translating blonde jokes to a visual medium. Given most of the cast are drawn as gorgeous, surprisingly few of the jokes are based around sex, even when it comes to innuendo. While there are lots of one-shot blondes characters who appear only for a single page gag, the lead (and series mascot) is Vanessa, recognizable by her distinctive hairstyle. She's very sweet-natured and likable and very pretty but incredibly foolish and permanently at odds with reality. Other important characters include Vanessa's niece (exactly the same as her aunt but a pre-teen), fellow Dumb Blonde Cindy and her good (and thankfully much smarter) non-blonde friends Kim, Chloe, Michelle and Anne.

The series currently has 27 volumes and has been adapted into an animated TV series.