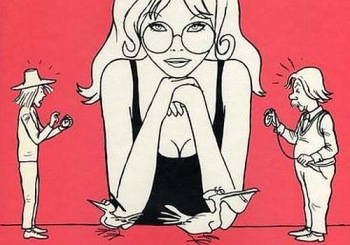 Do you seriously want to argue about relativity with Albert Einstein?
Advertisement:

Anselme Lanturlu (in English: Archibald Higgins; in German: Anselm Wüßtegern) is an edutainment comic series from France by The Professor Jean-Pierre Petit. They explain complicated concepts (mostly from mathematics and physics) in a humorous way. The series lasted from 1980 to 1990. A "new adventure" was published in 2005.

The books are out of print, but can be downloaded legally and for free here

. Thank you very much, professor!