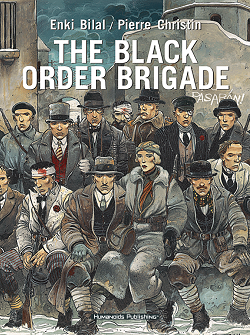 The Black Order Brigade is a Graphic Novel published in 1980 by Enki Bilal and writer Pierre Christin. The story tells of a number of veterans from the Spanish Civil War, meeting for a showdown in the late seventies.

In the winter of 1977, a band of retired fascists from the Franco regime team up to avenge the election of a socialist mayor in a small Aragonese village called Nieves. All the inhabitants are killed, and only two days later, news reach a London newspaper. Jeff Pritchard, a veteran from the XV international brigade, is shocked when he discovers the identity of the terrorists, because he fought them before. Pritchard understands that his time is nearly gone, and decides to call some of the earlier brigadiers together for a final adventure. This leads to a reunion in the French Pyrenees, and the story follows the trail of the "black order brigade" from Spain to Italy, and from Italy through Switzerland to Germany, to the Netherlands, and finally back to the German-French border, where the ultimate showdown takes place. Prichard, being the Sole Survivor, retires to the Hebridees, where he tells his story.