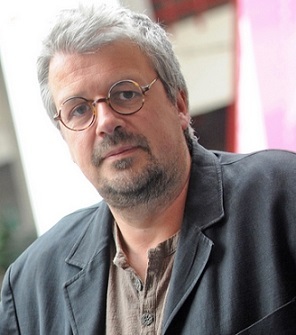 Sylvain Chomet (born 10 November 1963) is a French comic writer, animator and film director. Born in Maisons-Laffitte, Yvelines, near Paris, he studied art at high school until he graduated in 1982. Chomet moved to London in 1988 to work as an animator at the Richard Purdum studio. In September of that year, he established a freelance practice, working on commercials for clients such as Principality and Swissair.

In 1991, Chomet started work on his first animated film, The Old Lady and the Pigeons. The short film won him a BAFTA, the Grand Prize at the 1997 Annecy International Animated Film Festival, the Cartoon d'or prize, as well as the Audience Prize and Jury Prize at the Angers Premiers Plans Festival. It also received an Oscar nomination for best animated short film. Chomet's first feature-length animated film, The Triplets of Belleville was also nominated for two Oscars in 2003 (Best Animated Feature and Best Song), and introduced Chomet's name to a much wider audience. Chomet's next film was The Illusionist, which premiered at the 60th Berlin International Film Festival in February 2010 after a long and troubled production. In 2014, Chomet directed a Couch Gag The Simpsons.

In the mid-2000s Chomet founded an animation studio in Scotland, called Django Films. The Django Films studio was set up with the ambition to produce a number of films and establish itself in the film-making scene in both animation and live action. Unfortunately it was not successful and is now being dismantled.

In addition to his animation career, Chomet created many print comics, starting in 1986 with Secrets of the Dragonfly. In 1997, Chomet published Ugly, Poor, and Sick, with Nicolas De Crécy. This won them the Alph-Art Best Comic Prize at the Angoulême Comics Festival.

Chomet has created or worked on the following: