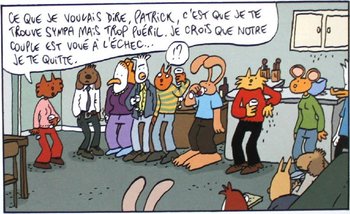 The Spiffy Adventures of McConey (Les formidables aventures de Lapinot) is a French comic series by Lewis Trondheim. It debuted in 1992 and ended in 2004. There are two types of albums in the series. Some are set in the present-day and recount the life of a young adult, Lapinot, his group of friends (among other Richard and Titi) and his Love Interest, Nadia. The other albums are set in a different time period and they parody a specific genre. Nevertheless, Lapinot, Richard and Titi also have the main roles in those albums.

See the recap page for the list of albums.

The Spiffy Adventures of McConey provides examples of the following tropes: