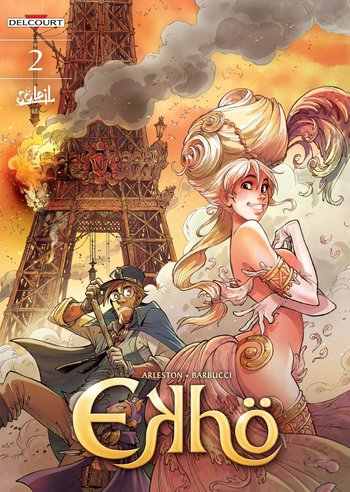 Ekho (in some countries also called Ekho: The Mirror World) is a French adventure-mystery comic series for young adults created by writer Christophe Arleston and artist Alessandro Barbucci, previously know for drawing W.I.T.C.H. and Sky Doll. It was first published in 2013, and so far consists of nine 50-60 page albums, the last one released in 2020.

One ordinary day, young Parisian student Fourmille Gratule is flying on a plane to New York. However, a squirrel-like creature introducing itself as Sigisbert appears before her mid-flight, telling her that her aunt Odelaia has died and left an inheritance for her. Caught by surprise, as she believed her aunt had been dead for decades, Fourmille accepts the inheritance and, together with her fellow passenger Yuri Pedrov, is instantly transported to another dimension: Ekho, the mirror world, where many aspects of modern life are present, along with magic, dragons and other fantasy elements, yet things such as electricity don't exist. Quickly discovering that she can never go back to her original world and that her aunt left her with a talent agency to run, Fourmille has to learn to live in Ekho, dealing with her developing partnership with Yuri and the mysterious Preshauns along the way. Oh, and apparently her body became so attuned to the mirror world during her passage that she is now possessed by souls of recently deceased people with unfinished business in Ekho.

Despite its beautiful, Disney-quality art and overall light-hearted tone, Ekho is not intended for children and often contains scenes of nudity, sexual jokes and, occasionally, medium-level graphic violence.