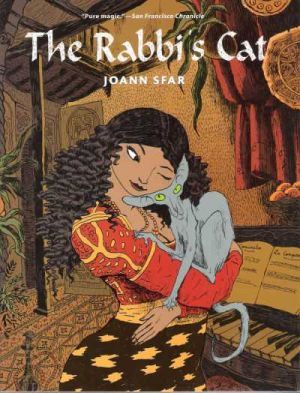 The Rabbi's Cat is a French comic book by Joann Sfar set largely in 1920s Algiers. Its protagonist, the titular nameless cat, is owned by Rabbi Abraham Sfar and his daughter Zlabya, whom he loves unconditionally. One day, annoyed by the constant squacking of the Rabbi's parrot, the cat pounces and eats it, discovering soon afterwards that he now knows how to talk. The Rabbi is alarmed by this not so much because his cat now talks, but that the first thing the cat uses his new-found skills to do is to lie (about eating the parrot). The cat (despite being an atheist) also wants to convert to Judaism (something the rabbi and his rabbi are dubious about, given both the fact that the cat is a cat and his lack of reverence for the divine). The rest of the story involves the adventures of the cat, Rabbi Sfar, and Zlabya around Algiers, as well as a trip to Paris and (in the second volume collected in the US) a quest across Africa to discover a possibly mythical city of black Jews in Ethiopia called Jerusalem.

Was adapted into an animated film in 2011. You can find the trailer on YouTube