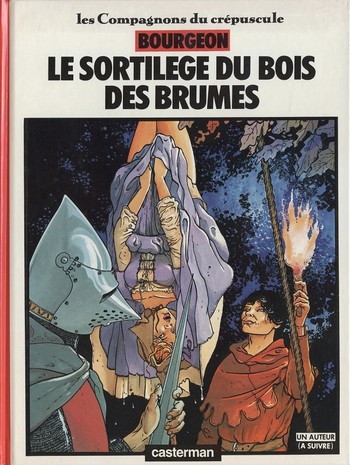 Les Compagnons du crépuscule (The Companions of Twilight) is a Medieval Fantasy written and drawn by French cartoonist Francois Bourgeon.

The story is set in The Middle Ages, more precisely in the years of The Hundred Years War. The story is told from the point of view of Mariotte, a Fiery Redhead who is also an outcast of her village. She joins up with a Knight Errant on a mission, alongside the Dirty Coward Anicet. The two youngsters follow the knight through his dreams, and arrive in the castle of the Malaterre family, where a plot is set to snare the knight, for the sake of dame Neyrelle, oldest of the Malaterre sisters. The three of them all love the knight, and the story ends in a Cataclysm Climax when an unnamed force intervenes to stop Neyrelle from gaining too much power. Mariotte survives, joins a group of travelling actors, and tells the story.