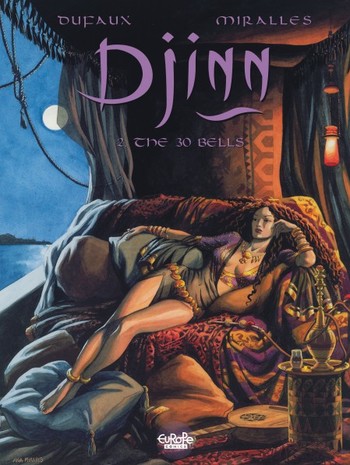 Cover of the second volume "The 30 Bells" note Keep in mind this is the most SFW cover available
Advertisement:

Djinn is a Franco-Belgian adult-adventure thriller comic written by Jean Dufaux and drawn by Ana Mirallès.

The story follows Kim Nelson, a young British woman in search of information of her grandmother's shadowy past. She discovers that she is descended from a harem girl from the Ottoman Empire known as Jade, who used to be the Sultan's favorite during the empire's twilight years and was said to be the incarnation of a djinn. Kim's quest takes her globetrotting to other countries as she searches for what ultimately became of Jade and meets an unusual cast of allies and enemies. Eventually, she discovers that she may have inherited some of her grandmother's djinn traits. The comic ran from 2001 to 2016 and it's split into 13 volumes, the first four taking place in the Ottoman Empire, the following five in Africa and the four final ones in India. These arcs were respectively referred to as the "Ottoman Cycle", the "African Cycle" and the "Indian Cycle".