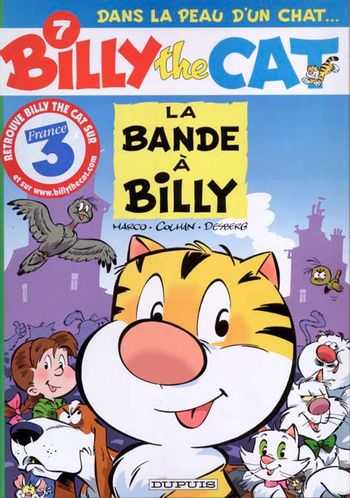 Billy the Cat is a Franco-Belgian comic book series by the Belgian Stéphane Colman and Stephen Desberg. Also an animated cartoon version has been produced for broadcast and is ran through American Broadcasting Company, amongst others. Both comic and cartoon deal with the everyday and secret lives of urban animals, and while the characters are largely the same in both versions, the stories and situations are very different.

The Comic follows the story of Billy, a normal schoolboy who often pranks and bullies animals. However, early in the first comic album, he is killed when he carelessly runs out in the street and is hit by a car. Told that his chances of getting into Heaven are slim due to his misdeeds, he is given a second chance by being returned to earth as a young cat. The comic follows Billy's attempts to adapt to living as a cat and chronicle his misadventures while he interacts with other animals. The comic is notably darker and more dramatic than the serialized television show.

Otherwise the television show, created in 1994, follows a similar premise with some major deviations. In the show the transformation is the revenge of an angry magician whose cat Billy had bullied, while the magician's cat assumes Billy's form and lives with his family. The cartoon is more episodic and lighthearted than the comic, though it is not completely unexpected.

Not to be confused with the UK comic strip of the same name, which ran in The Beano and was about a teenage superhero, or with Bill the Cat.