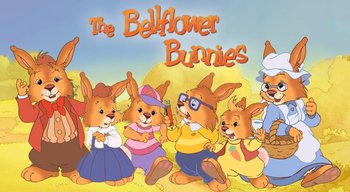 Ever wanted an antidote to Watership Down but felt Peter Rabbit was too British? Then how about a show about the adventures of a family of cute bunnies doing cute bunny things!

This French series takes a concept that would make for a very sugary series and makes it noticeably better entertainment than usual.

Based off the La famille Passiflore series of books by Geneviève Huriet (or Amélie Sarn, depending on the book) and Loïc Jouannigot, which were published in English under the name Beechwood Bunny Tales, The Bellflower Bunnies focuses on the adventures of the Bellflower family, a clan of seven rabbits who live in the fictional locality of Blueberry Hill. Papa Bramble and Aunt Zinnia take care of the family's five kids: Periwinkle, Poppy, Mistletoe, Dandelion and Pirouette/Violet.