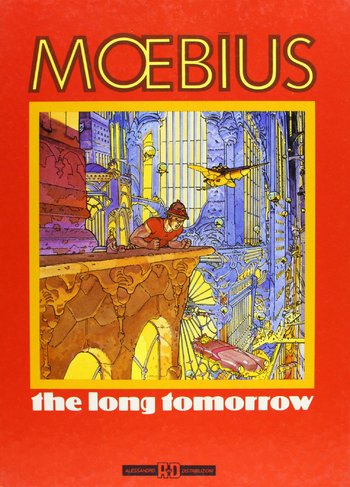 The Long Tomorrow is a comic book short story by writer Dan O' Bannon and Moebius. The story was serialized into two parts for French sci-fi magazine Metal Hurlant (known as Heavy Metal in the US). The creators developed the comic while working on the failed Alejandro Jodorowsky Dune project. The two would later work on Alien together.

Private Investigator Pete Club in a distant future on a space colony is hired by a beautiful wealthy woman to retrieve a special item for her from a dangerous side of the city. However, that turns out to be the least of Club's worries as he's dragged into a plot of interplanetary espionage and murder.

The Long Tomorrow is noted as a highly influential work on late 70's-80's sci-fi, seen as a major Trope Maker for Cyberpunk and its aesthetics. The art design directly influenced Blade Runner and George Lucas directly copied a robot's design in the story for the look of the probe droid for The Empire Strikes Back.

There are a million tropes in the city. This was twelve of them.