Film / My Dinner with Hervé 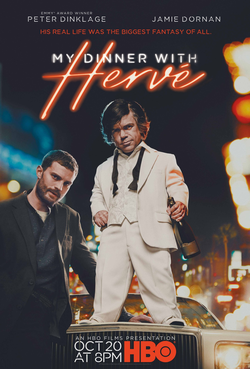 My Dinner with Hervé is a 2018 HBO biopic drama loosely based on the final days of dwarf actor Hervé Villechaize, starring Peter Dinklage as Villechaize and Jamie Dornan.

In 1993, Danny Tate is a recovering alcoholic and journalist. While other people at the paper are interviewing big names and ex-presidents, Danny's latest assignment is a back page fluff piece on washed up TV star Hervé Villechaize, of Fantasy Island fame.

Flying out to L.A. for the interview, Danny asks the typical questions of the spiraling ex-TV star. But soon Herve invites Danny out with him so he can get the real questions and real answers.

What follows is a night of chaos, drink and past regrets as Herve deals with the wreck his life has become, and Danny deals with issues of his own.