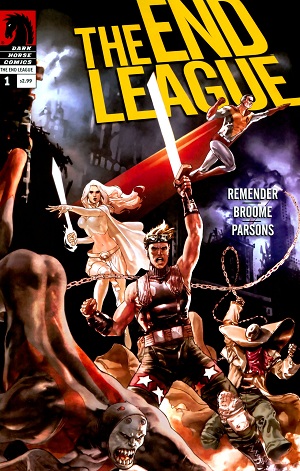 The End League was a series published by Dark Horse Comics, written by Rick Remender and pencilled by Matt Broom, featuring Expies and Captain Ersatzes of well-known comic book heroes (and villains) battling it out After the End.

Originally intended as an ongoing monthly, the eventual creative team broke apart as they took on other jobs, and the series was wrapped up after nine issues.

The story begins with Astonishman detailing how he caused the end of the world. In the present day, the last remnants of the titular team attempt to protect and salvage what's left of humanity, fighting against their evil, destructive counterparts, all while unaware of a greater danger fast approaching...