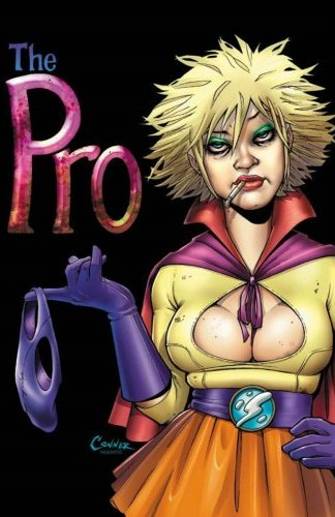 SHE CURSES! SHE SMOKES! SHE BLOWS!note ...AWAY THE COMPETITION.
Advertisement:

A bored young prostitute (and single mom) is given galactic superpowers by a Great Gazoo. She's immediately noticed by the local Expy superheroes but doesn't feel like going along with their self-aggrandizing hero bullshit. Instead, she exacts revenge on a Jerkass customer, and she teaches the local Superman equivalent about sex. Unfortunately, his semen is also superpowered and knocks a plane out of the sky, and while he manages to save the passengers, he's forced to do so pantsless. The ensuing scandal damages the entire league's reputation irrevocably.

She's about to be kicked out, but the meeting is interrupted by a terrorist attack, and the Pro is forced to make a life-or-death decision.

The Pro provides examples of: