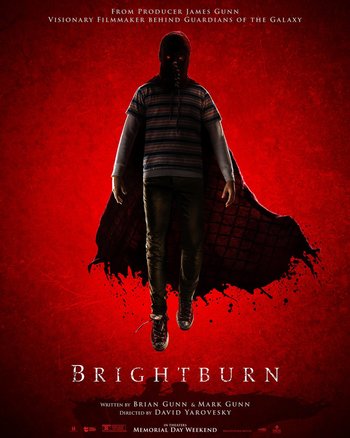 Evil has found its superhero.
"You're the only ones who know just how special I really am."
— Brandon Breyer/Brightburn

BrightBurn is a 2019 Sci-Fi Horror film produced by James Gunn, written by his brother and cousin Brian and Mark Gunn, and directed by not-a-Gunn-but-frequent-collaborator David Yarovesky. The film reunites James Gunn and Elizabeth Banks, who previously worked together on Slither.

A happy couple who dream of starting a family, get their wish come true one night when a rocket ship crash-lands near their farm, and a baby boy is found on board. The couple takes him in as their own and raise him lovingly. They soon find out that he has extraordinary superpowers. Sound familiar?

Well, that's about where the similarities end. Because, unfortunately for everyone around him, this boy — named Brandon — doesn't plan on using his powers for noble causes...