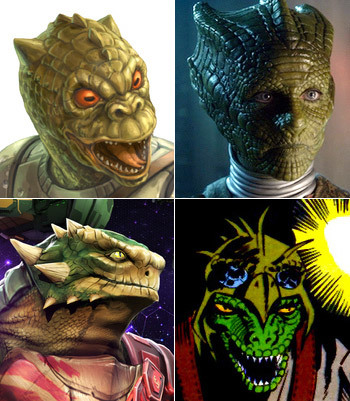 L-R, top to bottom: A Trandoshan, a Silurian,
a Sakkran, a Lizarkon

The Reptilians are one of the stock Humanoid Aliens, sporting reptile-like features and popping up frequently in Science Fiction and abduction stories. They share quite a few similarities with Little Green Men and The Greys in terms of appearance (human-like, large eyes, baldness, strange skin) and modus operandi (abduction, invasion), but they have enough unique features to set themselves apart.

Since they are reptiles they, of course, are almost always evil. Unlike their Grey and Green cousins, though, the Reptilians tend to be portrayed as even more vicious and sadistic, often abducting humans as a Slave Race or as a food source. They are frequently shapeshifters, changing into human form in order to infiltrate our ranks and take over the world before we even realize it. Sometimes, like Little Green Men and The Greys, they can be more enigmatic invaders whose only direct contact with humans is through abductions. The trend nowadays, though, has been to give the Reptilians a more detailed culture than those two, typically as either Scary Dogmatic Aliens or as the vanguard of a vast but decadent empire. They commonly have hidden bases Beneath the Earth, which probably stems from a fusion of the Primal Fears of both reptiles and the underground. Oftentimes, they are mentioned as having created The Greys (by cloning) as a Slave Race, until some decided to rebel, thus forcing the Greys to steal human DNA to survive.

Often they are very strong, but there are also variants in which they are not much stronger than humans. In many cases, they are very sensitive to cold, but like heat instead. And often they can also quickly recover from injuries. Often, they are callous and consider humans weak because they give in to their feelings more quickly. But it may also be that they also develop feelings when they spend more time with humans. Nevertheless, love relationships or even common descendants with humans are a rarity. And they are almost always hunters and carnivores, even the good ones among them.

If the biological history of the Reptilians gets mentioned, they are frequently revealed to be dinosaurs who attained sapience, somehow survived the K/T Extinction event, and moved elsewhere among the stars, not necessarily in that order.note To be technical, many believe humans and other mammals themselves evolved from reptilelike synapsids, so having the Reptilians actually remain what humans would recognize as reptilian would be quite a stretch, especially if they moved to a planet with a very different environment from Earth's to evolve in. Doesn't help that most dinosaurs weren't very "reptilian" in appearance, with feathers and the like — sapient dinosaurs would look more like toothed birds than anything else. Such dinosaur-derived creatures are sometimes called "Dinosauroids", a term first popularized by paleontologist Dale Russell's hypothetical Troodon-descended humanoid. Naturally, those dinosaurs often turn out to have been descendants of the carnivorous theropods such as Velociraptor or Tyrannosaurus rex (it helps that many theropods are considered to have been the most intelligent dinosaurs there were). Alternatively, they evolved on a planet whose evolutionary history is just like that of Earth, but stalled out before mammals could take their rightful place at the top.

Depending on just how reptilian the Reptilians are portrayed to be (and depending on a program's budget), they can run the gamut from bald humans with weird eyes to full-on Lizard Folk with a human-like gait. They usually have a hatred or disgust for all mammals. It is common for Reptilians to insult humans by referring to them as "apes". Also, a rule of thumb to keep in mind is that the more reptilian the aliens are, the less likely they are to be portrayed as good guys, in line with Reptiles Are Abhorrent; sympathetic Reptilians are more likely to have Non-Mammal Mammaries, among other things.

Compare Lizard Folk and Snake People, which are generally the Fantasy Counterparts to this trope. The former also tend to be more like dumb scaly orcs in contrast to the advanced Reptilians. Also compare The Flatwoods Monster, an alien cryptid that has a lesser-used reptilian alternate iteration.