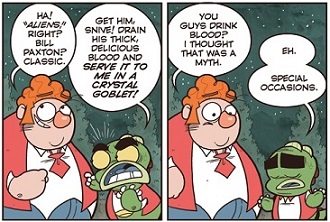 Cyrus and Krel, being themselves.

is a webcomic by "William Tallman".

Hollow Earth is real and "Reptoids" live Beneath the Earth in secret. Or at least they used to. Some unknown catastrophe forced a large segment of reptoids to migrate to the surface and reveal themselves to human society. Unfortunately, reptoids aren't well accepted by humans and treated like second class citizens. This brings us to the story of Krel Irontail, formerly the Emperor of the Reptoids currently in hiding from the rest of his race along with his slave Snive. After being fired from his previous job at a Burger Fool, he is now employed at a hardware store under human reptoid culture enthusiast Cyrus Murdock.

Unfortunately, the series is now dead, with the site domain now up for grabs.