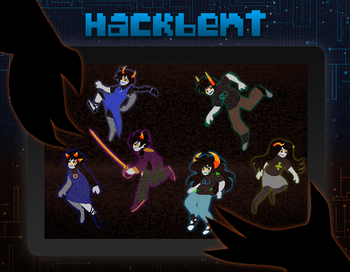 The new (fixed) title page as of January 2017
Advertisement:

and its official blog can be found here

The fancomic follows six trolls from Alternia who have been captured by a mysterious alien race that wishes to test out their own modded version of Sgrub to figure out why the Alternians were chosen. The events began when Alleph finds the game copy, in many ways this goes along with Theme Naming in which Alleph (alpha) is the beginning. What starts off as a run-off-the-mill session, is made interesting by a certain character who decided to disobey the rules.

The author has a knack for making some events that transpire in this session sad as well as providing heart wrenching twists as well.