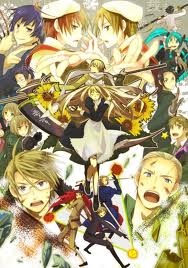 A fanmade Hetalia: Axis Powers RPG game/animation which is one of the more famous ones. However, it is discontinued due to the creator not liking the fact that fanart of the game was getting more popular than fanart of Hetalia itself.

Japan creates a new video game. However, an error happens, the error becoming sentient (taking the form of a doppelganger of Japan) and sucks characters into the game. The error is slowly trying to trap them in the game, and sometimes uses his powers to 'infect' people with a virus, causing them to come under his control.

Subbed videos can be found here