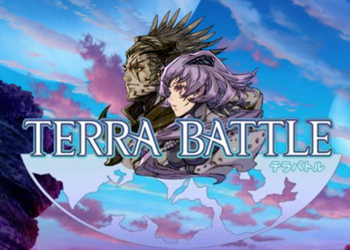 Terra Battle is a Turn-Based Strategy game for iOS and Android developed and published by Mistwalker. It was released internationally on October 9, 2014.
Advertisement:

The world is slowly dying; the atmosphere is thinning and even gravity is beginning to fail. Refusing to accept this fate a small group of pilgrims begin a search for the Maker, sleeping deep within the core of the planet. Along the way they must examine the fallen empire of Gallus and discover that there is more their world than they thought. These discoveries begin to raise questions about the very nature of their world and even the Maker itself.

Gameplay revolves around performing "pincer" formations to attack enemies; that is, flanking an enemy from adjacent tiles in opposite directions. Player units that have a clear line of sight to either attacking unit can perform combo attacks with the two attacks. All participants in the attack have a chance to activate skills, such as doing extra damage, healing allied units, or casting buffs and debuffs. Enemies can attack either individually or by forming their own pincer formations. Each stage has a set number of enemy waves; the stage ends when all waves have been defeated (victory) or less than two units remain (defeat).

The game features a "Download Starter" campaign, inspired by Kickstarter. Every 100,000 downloads, a reward is unlocked. Many of these rewards are new music or art by industry veterans such as Nobuo Uematsu and Kenji Ito, collectibles such as a strategy guide and an original soundtrack, and new game features such as Co-Op Multiplayer and Player Versus Player modes, with the ultimate goal of 2 million downloads prompting development of a Gaiden Game for consoles. Said goal was met on April 30, 2015.

A sequel game, titled Terra Battle 2, was launched in Japan on September 20, 2017 and began rolling out in other territories on September 21. Tragically, its run was cut short and all servers have shut down.