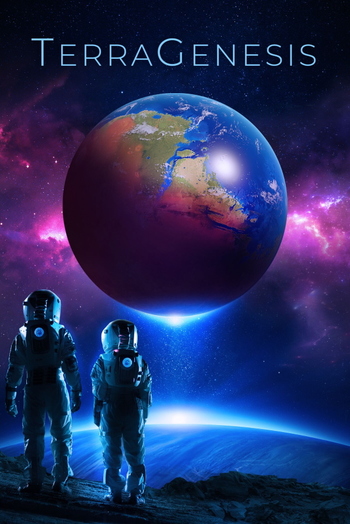 Settle the stars
TerraGenesis is an indie mobile science-based Real-Time Strategy Simulation Game developed by Alexander Winsn and distributed by his company Edgeworks Entertainment, previously known for the Halo machinima The Codex. It is available for iOS, Android, and Microsoft Windows.
Advertisement:

Set in either the near or distant Future, the player is given the task to terraform a planet, moon, or dwarf planet (called "world"), with help of one of the four Factions, each with different goals: Daughters of Gaia, Sons of Hephaestus, United Nations Space Administration, and Horizon Corporation, colonize and develop the colony's culture, and make the world the next habitable planet for humans to settle on. The player does so by controlling the world's temperature, pressure, oxygen, and water with the buildings they build in the world's cities. If they have Biosphere turned on, they can even piece new organisms from genes to inhabit and further influence the world.

The simulation is all based on real science, courtesy of data from NASA. It's full-time and runs when the game is closed, unless you have paused. The player can terraform Mercury, Venus, a climate-change-suffering Earth, the Moon, and Mars for free. The moons of Jupiter, Saturn, Uranus, and Neptune, the dwarf planets, the "speculative" planets of solar system TRAPPIST-1, the game's fictional planets, Earth's forms in the past (and future), and even a randomly generated planet are paid access.