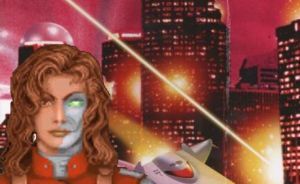 A multidirectional shooting game by P-Squared Productions / Safari Software, released in 1994 for MS-DOS, as shareware. It was re-released as freeware in 2007 and can be downloaded from here

The planet Seche is besieged by the Vulture cult-army, bent on conquest. The only line of defense is the local Traffic Departments, patrolling through the city streets in "hoverskids" — hovering craft armed with pulse cannons and missiles.

The story begins in 2178, with Ric Velasquez, a Lieutenant in the Vulthaven Traffic Department, returning home from garrison duty to see his 11-year old daughter. Before he can reach the hangar, however, he's shot down by Vulture hoverskids and reduced to a flaming wreck. Fourteen years later, the daughter, Marta Louise Velasquez, has joined the Vulthaven TD to avenge her father's death.

The game is highly linear, consisting of a fixed series of missions, and also very story-oriented in the Story to Gameplay Ratio.