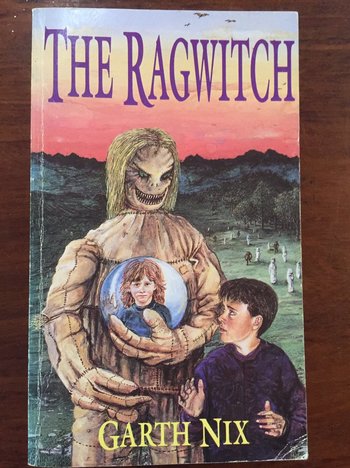 A young-adult High Fantasy novel by Garth Nix, which should tell you a few things all by itself.

Ten-year-old Paul and his sister Julia are on vacation at the beach one day when they find a shell midden on the shore. When they climb it, they find a crow's nest with a creepy little ragdoll in it. Paul distrusts it immediately, but Julia is entranced, and brings it home, where their parents don't seem to be able to see it. The next morning, Paul hears someone moving around, and follows the sound out to find his sister, possessed by the doll, building a strange blue fire on top of the midden. She freezes him helplessly in place, then jumps into the fire and disappears. Paul rebuilds it and follows Her through, determined to rescue his sister.

So begins a quest to stop the Ragwitch and save his sister (and maybe the world he finds himself in on the side). Throughout, the narrative switches between Paul's journey and Julia Fighting from the Inside despite the Ragwitch's attempts to control her mind.

Despite the fact that it hits pretty much the whole checklist of standard high fantasy plot devices, it still manages to make them all work in original ways and create a world that seems a lot bigger than what we get to see of it.