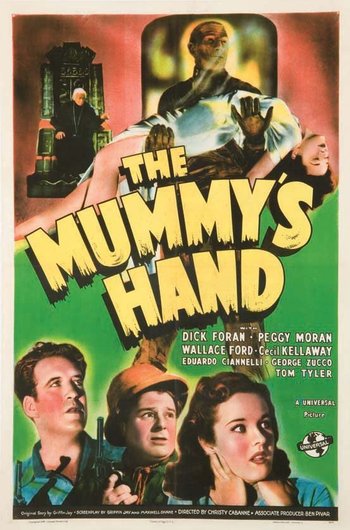 The Mummy's Hand is a 1940 Universal Horror film, directed by Christy Cabanne.

Steve Banning (Dick Foran) and his sidekick, Babe Jenson (Wallace Ford) are stuck in Egypt following largely unsuccessful efforts at archaeology. They get lucky when they discover a clue to the location of the Princess Ananka's tomb. They convince Solvani (Cecil Kellaway), a travelling magician, to finance the expedition there. Their expedition is also joined by Marta Solvani (Peggy Moran), daughter of the magician. They all become targets to a secret order charged to protect the tomb and their Mummy Kharis (Tom Tyler).

The Mummy's Hand is a reboot of The Mummy from 1932, exchanging the mummy Imhotep for the mummy Kharis but keeping the backstory all the same. It is also a Trope Codifier for the mummy-themed horror films.

It was followed by three sequels: The Mummy's Tomb (1942), The Mummy's Ghost and The Mummy's Curse (both 1944). It would later be remade as The Mummy (1959), with Christopher Lee as Kharis as Peter Cushing as Banning. Its pulpier, more Two-Fisted Tales tone was also a big influence on the 1999 remake of the original Mummy.