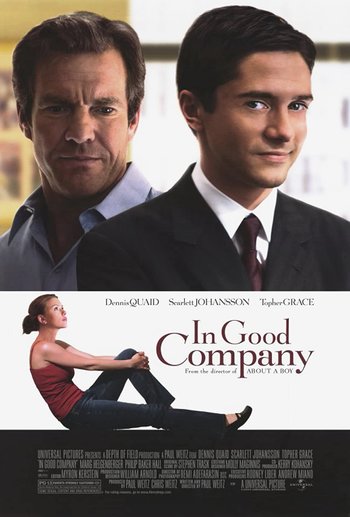 Are you psyched?
Carter: I'm gonna have to let some people go.
Dan: Why do you say let them go? They don't want to go. Why don't you just say fire them?
Carter: Because it sounds better.
Dan: Not to the person getting fired.
Advertisement:

The film revolves around a middle-aged advertising executive whose company is bought out by a large international corporation leaving him with a new boss who is nearly half his age. His life is further complicated when his boss takes a romantic interest in his daughter.

Dan Carter: I-I'm not sure l understand how the way the world is changing is actually going to change how we do business. We're still selling a product, right? Which hopefully someone needs. We're human beings with other human beings for customers. So I don't see how this company is like its own country. I mean, just because we sell different kinds of things, that doesn't mean we should operate by our own laws, does it? Besides which, countries, at least democratic ones, they have some obligation to their citizens, don't they? So how do layoffs and bottom line thinking fit into that?
Dan Foreman: You can't be pregnant.
Advertisement:
Ann Foreman: Yeah I can, I am
Dan Foreman: Yeah, how could that happen?
Ann Foreman: Well I think that you were there too.
Carter Duryea: Oh, thank-you. I'm totally scared shitless. I have no idea what I'm doing. Don't tell anyone, okay?
You ask some excellent questions. Excellent, excellent questions. I'm glad you asked them. And I'm leaving it to you, to all of you, to answer them.
Carter Duryea: Wow, you really believe in this stuff, huh?
Dan Foreman: Of course. Why else would I do it?
Carter Duryea: Dan, you seem to have the perfect marriage. How do you do it?
Dan Foreman: You just pick the right one to be in the foxhole with, and then when you're outside of the foxhole you keep your dick in your pants.
Carter Duryea: That's poetic.
Dan Foreman: We made a deal, remember? We made a deal we'd always be honest with one another.
Alex Foreman: Dad, I was like five years old when we made that deal.
Dan Foreman: Yeah, I liked you better then.