Literature / Pavane In Pearl And Emerald 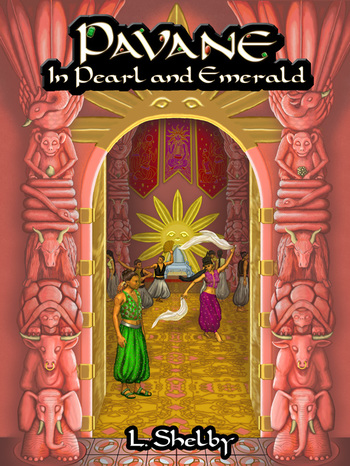 Folta: When I look at things, I always seem to see what could become of them, instead of what they are. I suppose that makes me seem impossibly dreamy, to a practical man like you.
Kide: Actually it makes me feel as if we have much in common. When I look at people, I see how they could become useful to me, instead of what they are. That is very much the same thing, is it not?
Advertisement:

Pavane in Pearl and Emerald is a court intrigue fantasy romance novel, with the same setting as Cantata in Coral and Ivory but at a later timeframe.

Isde Kide is the emplikil of a territory that no longer exists in the Borgim Empire, but that does not make him any less eminent or able to leave the emperor's service. It does mean that he has no income and is unable to support a wife, let alone himself, unless he marries an heiress with money of her own, such as the emperor's daughter.

Boresi, the princess, is kind and beautiful, but she is obsessed with the art of the dance to the exclusion of all other concerns, an obsession which is then spread to all of her attendants. In fact, it seems like she's been enchanted, but that's not possible because magic is illegal in Borgim. The princess's handmaid Folta asks for Kide's help, but she isn't able to tell him much beyond a cryptic warning of danger.

On top of all this, the emperor has decided to invite suitors from all the lands about, in hopes that one of them may be able distract the princess from dancing. Some of these foreign suitors are plotting against Borgim, but Kide has no easy proof the conspiracy that he learns about. Kide will somehow have to figure out how to break the princess's enchantment and prevent the kingdom from ruin using his wit and talents- which are gossiping, embroidery, art critique, and flower arranging.

This Novel contains examples of