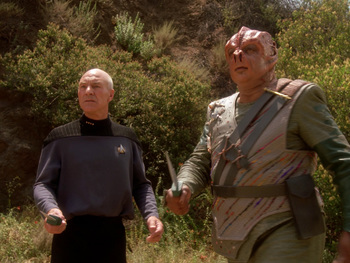 The Enterprise arrives at the uninhabited El-Adrel system to meet with an enigmatic race of people called the Children of Tama. This is not a First Contact situation; the Tamarians have been contacted before, but the records indicate that previous diplomats found it impossible to communicate with them. The crew of the Enterprise is hoping that they can do it better. When they make contact, the problem the previous teams faced becomes crystal clear: the language of the Tamarians is bizarre gibberish that none of the crew can make any sense of. The translators are double-checked and found to be in perfect working order. The problem is that nearly everything the Tamarians say is a proper noun; the names of people and places without any context that would let the translators (or crew) guess at the meanings being alluded to. Picard makes a futile attempt to establish an alliance with them, but the conversation goes nowhere. Equally flummoxed, the Tamarians have an argument amongst themselves, evidently about the best way to proceed. Then the captain of their vessel holds up two knives, announces, "Darmok and Jalad at Tanagra," and beams himself and Picard to the surface of a nearby planet. The Tamarians’ ship intentionally blocks the Enterprise from beaming Picard back or communicating with him.

The Tamarian captain offers one of his knives to Picard. Assuming he wants a fight, Picard refuses it. At an impasse, the two captains make camp for the night. The Tamarian shows no further signs of hostility, but Picard still can’t understand a word he’s saying so it’s impossible to tell if he can be trusted or not. When Picard fails to get a fire going, the Tamarian offers some of his, with the words, "Temba, his arms wide." Picard vaguely understands that these words carry the meaning of accepting a gift, and the Tamarian smiles, seeing that at least the beginning of a connection is forming.

Worf takes a shuttlecraft toward the planet, gambling that the Tamarians are unwilling to take any violent action to stop them. They appear to have gambled wrong, as the Tamarians fire on the shuttlecraft, but only with enough force to cause minor damage that forces them to abort the rescue attempt. Geordi comes up with a way to scatter the Tamarian interference, but says it will take an entire day to implement, and it’s not at all clear whether Picard will be safe for that long. Worf proposes attacking the Tamarian ship, but Riker rejects that, preferring to save it as a last resort. He orders Data and Troi to try to find a way to decode their language so they can somehow talk things out.

Picard wakes up the next morning to find that the Tamarian captain has wandered away. He soon comes running back, again trying to give one of his knives to Picard. Picard refuses to take it at first, but then he hears a noise that sounds like a large animal, and he realizes that the Tamarian wants help in fighting the creature. He takes the knife, and the two square off against the creature, which has formidable skill at camouflage. The Tamarian keeps trying to give Picard instructions, and Picard slowly catches on to what he’s trying to say.

The ship’s sensors show that Picard is being attacked, so Riker tells Geordi to rush his field-scattering beam and get Picard out of there. He tries, but ultimately fails, and the attempt at transporting prevents Picard from protecting the Tamarian, who gets badly injured by the creature. Nevertheless, the creature runs off. They set up camp again, and Picard asks to know more about Darmok. The Tamarian tells the story: Darmok was a hunter who met another man named Jalad at the island of Tenagra. They fought the beast and left the island together. That was the idea of coming to the planet—to help them come together by facing danger together. The Tamarian asks for a tale in return, and Picard recounts a bit of The Epic of Gilgamesh, a story in much the same vein… except for the fact that in that one, one of the heroes dies.

Riker prepares to attack the Tamarian ship in an effort to take out their field generator, as Data announces that the Tamarian captain has died of his wounds and the creature is returning to Picard’s position. Riker fires, the first blast taking out the Tamarian field emitters. They beam Picard back just as the creature is about to lunge at him. Both ships engage in combat, but Picard returns to the bridge and calls off the fight. He hails the Tamarians, using what snippets of their language he’s picked up to explain what happened on the planet. The Tamarians are touched, and their response implies that they’ve added the story to their lexicon: "Picard and Dathon at El-Adrel." Picard offers them their knife back, but they let him keep it as a memento. Both ships head back into space, unsure if a friendship has been established but knowing that at the very least they are not enemies.

Tropes featured in "Darmok" include: