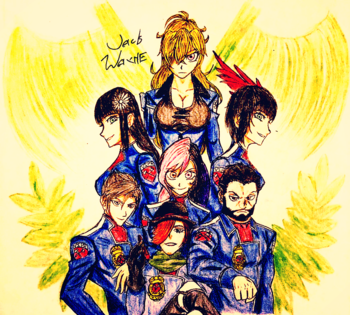 "Yang wasn't used to leadership, but she wasn't going to accept Ozpin's suggestion of mandatory rest either. Not when it meant losing her spot on Team RWBY. If she had to lead a rookie squad of police officers against the White Fang to prove she could still fight, then so be it. Too bad no one told her the VSPR was made up of Vale's worst criminals, many of which she knew by name."
— Fanfiction Dot Net summary.
Advertisement:

Captain Dragon is a RWBY Alternate Universe story by Coeur Al'Aran, which explores an alternate ending to Season 3 where Cinder Fall’s attempt to kill Ozpin and steal the full Fall Maiden powers fails, resulting in her death. Unfortunately, this ending isn’t happy for everyone as Yang, still having lost her arm, isn’t able to return to Beacon and Team RWBY due to Ozpin believing she needs time to recover from the loss of said arm.

Unwilling to stand by and accept that decision, Yang’s plead for a second chance is accepted on one condition: that she proves herself by leading a new squad of rookie cops made up of former criminals to fight against and take down the White Fang once and for all. What could possibly go wrong?

The complete story is available to read starting here

, while the cover art by Jack_Wayne can be found here

This Fan Fic provides examples of the following tropes, which may include unmarked spoilers: