Film / Happy Birthday to Me 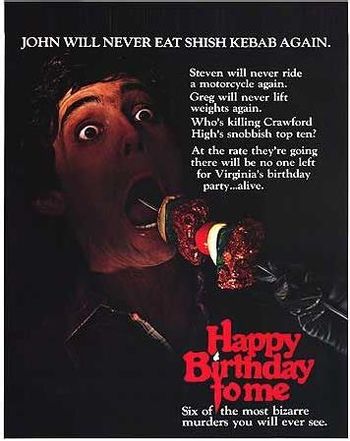 John is a lucky man, as he doesn't appear in the movie at all.note (Death by shish kebab however, does)
Advertisement:

Happy Birthday to Me is a Slasher Movie from 1981.

Set in the prestigious Crawford Academy, the film centers around Virginia, who suffered a traumatic accident on her birthday during her childhood. As another birthday is coming near, her buried memories of that fateful day have started returning little by little. But she also tends to have blackouts during these events. And some people tend to coincidentally disappear too, especially those close to her...

The film starred Glenn Ford as Dr. Faraday, and Melissa Sue Anderson (from Little House on the Prairie) as Virginia. The film also featured an early appearance from Lenore Zann (future voice of Rogue in X-Men: The Animated Series and Aisha in Outlaw Star).

These are jolly good examples: