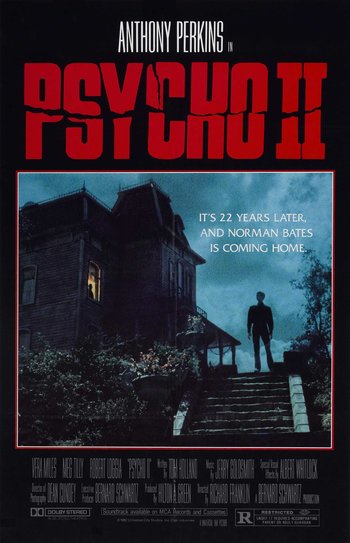 Psycho II (1983) is the first sequel to Psycho, directed by Richard Franklin and written by Tom Holland (no, not that one). Anthony Perkins and Vera Miles reprise their roles as Norman Bates and Lila Loomis, respectively; also in the cast are Meg Tilly, Robert Loggia, and Dennis Franz. The score was composed by Jerry Goldsmith.

After more than two decades of confinement, Norman is pronounced cured and released from the mental institution. He attempts to rebuild his life, but relatives of his victims conspire to drive him insane again, hoping to have him re-committed.

This is not based on Robert Bloch's 1982 novel of the same name, which has a completely different plot which Universal flatly refused to film. (Given that, among other things, said novel has a scene where many of the male movie stars of the day are portrayed as gaynote It's actually shown to be a group of Camp Gay celebrity impersonators— Bloch had to have one of his little jokes — not to mention the whole "Norman vanishes at an early stage before his fate is revealed towards the end of the book, and oh yeah he was killed" thing — you can see why.)