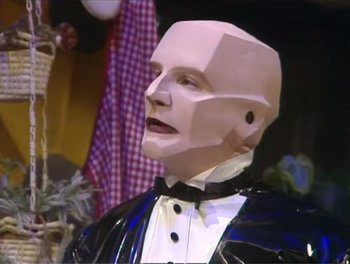 Red Dwarf receives a distress call from a crashed spaceship, the Nova 5. As usual, Rimmer claims this to be aliens. But according to the on-board service mechanoid that sent the distress call, Kryten, the ship contains lifeforms of a much less hostile nature — women. The Red Dwarf crew boldly spruce themselves up to respond to the call. However, on arrival the gang are shocked to find the droid character Kryten has been looking after, clothing and feeding three skeletons ever since the crash, and have been that way for centuries. Kryten however, takes some convincing. How will he cope now? What will he do? After all, he is programmed to serve on the human race (as he explains, "I serve, therefore I am"). In the end, Lister takes pity on him and brings Kryten back to Red Dwarf.