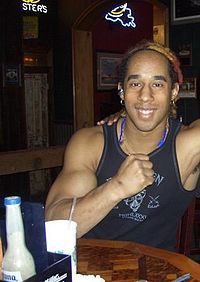 "You know, the secret is to always be ready. I'm always training. Whether it's martial arts, whether it's stunt training, whether it's weight training, just physical fitness. Always got to stay ready and just be ready to adapt."
Advertisement:

Lateef Crowder dos Santos (born November 23, 1977 in Salvador, Brazil) is a stuntman, martial artist, and actor based in California. Born in Salvador, Bahia in Brazil, he moved to San Jose, California, at the age of four. Growing up, he studied gymnastics and Capoeira, and joined the Zero Gravity Stunt Team.

Lateef Crowder is largely notable for his work in portraying Capoeira in film. His first major film role was as a capoeiristra fighting Tony Jaa's character in Tom-Yum-Goong, the choreography of which was abruptly reduced due to Crowder damaging his Achilles's tendon during filming. He became a fan-favorite to play Eddy Gordo in the Tekken live-action film, which he was ultimately cast in.

Crowder later joined the Star Wars franchise, to perform the Mandalorian bounty hunter Din Djarin's most physically demanding stunts and fight scenes (substituting for Pedro Pascal, whom he trained for Kingsman: The Golden Circle). This would earn Crowder a SAG Award, when The Mandalorian Season 2 won Outstanding Performance by a Stunt Ensemble in a Television Series, followed by the first Emmy for Outstanding Stunt Performance. Beginning with The Book of Boba Fett, he does stunts for multiple Star Wars characters.