Film / Too Fat Too Furious 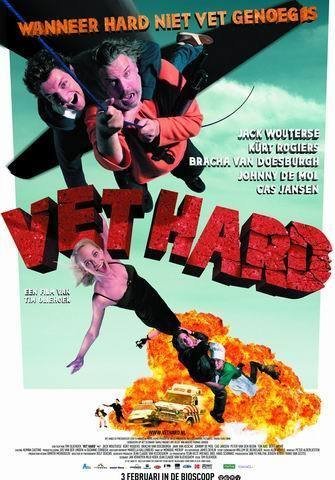 Worst prison-escape plan that succeeded ever.
Bennie: This is Vuk. He's into electricity.
Martin: Electricity? We don't have any problems with our electricity.
[Vuk electrocutes himself and the lights go out]
Bennie: Well, now we have.

Vet Hard (released in English as Too Fat Too Furious) is a Dutch 2005 (black) comedy / action movie directed by Tim Oliehoek. It is a Foreign Remake of the 2002 Danish movie Gamle mænd i nye biler (that is known in English as Old Men in New Cars).

Storyline: When Bennie (Jack Wouterse) is released after five years in prison for robbery, he finds out his beloved (adoptive) father Mast (Jaak Van Assche) is dying. On top of that, Mast reveals to Bennie that he has another (biological) son, Koen (Kurt Rogiers) in Belgium in a prison, and his last wish is to meet this son. Bennie frees Koen out of prison; unfortunately it turns out Koen murdered and raped (in that order) multiple women and still has a penchant to keep doing that again.

Bennie's plan is to acquire 300,000 Euro via crime, in order to buy a liver from the black organ market to save his father. But criminals from his past show up demanding a large sum of money from him, so he has to deal with that as well; they put a watch on him in the form of their "Yugoslavian" cousin Vuk, who likes to blow stuff up. Things are also complicated by the fact that Bennie's newfound brother is repeatedly doing murder attempts; that the employees of the snackbar (Dutch fastfood take-out joint that serves fries with croquette

) he owns have in Bennie's absence turned to cooking quiches and deluxe sandwiches instead (to Bennie's horror) and when Bennie is trying to involve them in his criminal plans they aren't worth anything as criminals at all because they're only obsessed with baking quiches. Plus that all of these characters keep crossing paths with a manic, suicidal woman (Katja—Bracha van Doesburgh).

And then things go from bad to worse—suffice to say an absurd amount of people knocking each other out, guns of any caliber being shot, a prison escape, a bank robbery, police chases, many car crashes and a hijacked airplane follow.

An excellent Youtube recap/review (17 min.) in English with English-subtitled scenes of the movie is here

The trailer, English-subtitled, is here