Film / Uncle Boonmee Who Can Recall His Past Lives 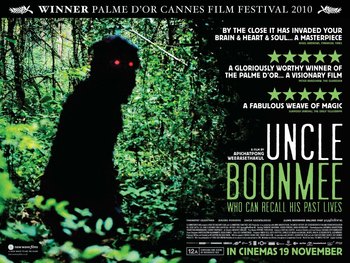 Bigfoot lives!
"Heaven is overrated. There's nothing there."
Advertisement:

Uncle Boonmee Who Can Recall His Past Lives is a 2010 film from Thailand, directed by Apichatpong Weerasethakul.

Uncle Boonmee is a rancher and beekeeper, who is suffering from terminal, end-stage kidney failure. He has gone to the countryside to die, accompanied by his sister-in-law Jen, her nephew Tong (who happens to be a monk), and Jai, a Laotian immigrant who is serving as basically Boonmee's hospice nurse.

One night at dinner, the ghost Boonmee's wife Huy, dead 19 years, shows up out of nowhere. After some initial shock the family takes this pretty well, Huy telling them that she could hear their prayers from the other world, that heaven isn't very interesting, and that ghosts are attached to people, not places. Then their son Boonsong, who has been missing for many years, also turns up at the same dinner—having been transformed into a sort of Bigfoot creature. The Bigfoot creature (Word of God calls it a "monkey ghost", but that phrase is not mentioned in the film) was seen in the opening sequence, and is seen at other times throughout the movie, staring with spooky red eyes. It turns out that Boonsong, who used to be a photographer, spotted the monkey ghost and went into the forest to find it, and somehow became one.

After his visit Boonsong seems to go back to the forest, while the ghost of Huy remains to care for Boonmee as he approaches the end. Boonmee wonders about concrete concerns, like what will happen to his sister-in-law, and more existential dilemmas like what sort of karma brought him here and what he might become in his next life.

Also, a woman has sex with a catfish.