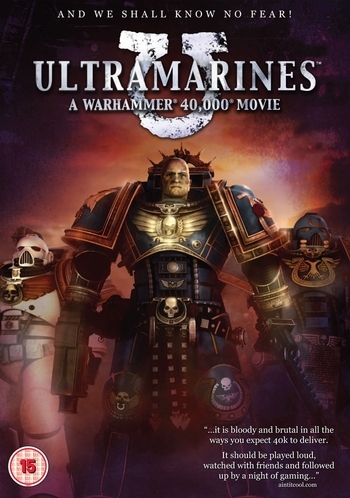 Ultramarines is an animated Warhammer 40,000 movie, released in 2010 by Codex Pictures, written by Dan Abnett and featuring the voices of Terence Stamp, Sean Pertwee, and John Hurt.

The remote planet Mithron is home to an Imperial shrine, guarded since time immemorial by a hundred Space Marines of the Imperial Fists Chapter. Now, however, the planet has gone silent, save for a single emergency beacon broadcasting a request for aid. The nearest battle-worthy force able to respond is the Second Company of the Ultramarines Chapter, and because they are busy with their own obligations (described in more detail in the prequel comic), the only forces that can be spared are a single Captain named Severus and the newly-minted Marines of Ultima Squad — including a young recruit named Proteus, who is a bit rough around the edges, but eager to prove himself on the battlefield. It now falls to Ultima Squad to solve the mystery of what happened to Mithron, without getting killed in the process.

Compare and contrast with Damnatus and The Lord Inquisitor, the other (fanmade) 40K movies.