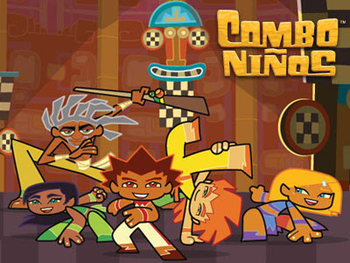 In the city of Nova Nizza ex-mayor Diadoro desperately searches for a way of regaining his power, with the help of his assistant Gomez they search for Divinos, powerful magical beings with a penchant for chaos, freeing them in exchange for their help.

Unfortunately the Divinos always decide the take their own course of action to take over the city. And this is when the Combo Niños enter, Azul, Serio, Paco and Pilar, four kids with the mission to protect the city and keep the Divinos sealed. Trained by old Mestre Grinto in the ancient art of Capoeira these kids have to balance the responsibilities of being the city's protectors and living their normal lives.

This would end up being the last show produced by SIP Animation (the successor to Saban International Paris) before the studio's closure in 2009.