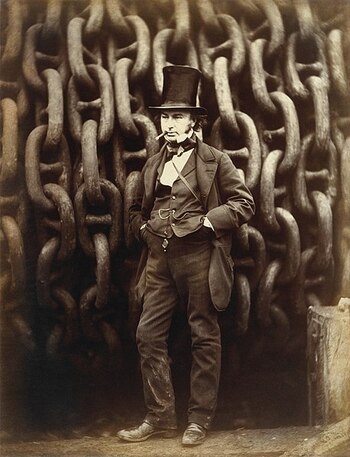 Brunel standing before the launching chains of the Great Eastern, probably the most well-known image of him.
Advertisement:

Isambard Kingdom Brunel (9 April 1806 - 15 September 1859) was a British engineer who is widely regarded as the face of the industrial revolution. He is best known for his three ships (the Great Britain, Great Western and Great Eastern steam ships), the Great Western Railway that connected much of Britain to London, and the Clifton suspension bridge, one of the most prominent structures in Bristol.

Brunel's early life was a relatively happy one. Tutored from a young age by his father, Marc Isambard Brunel, Isambard then went on to learn at several schools in Paris. However, being English in birth, he was unable to attend the selective engineering school École Polytechnique. Instead, he was tutored under renowned clockmaker Abraham-Louis Breguet.

His first major project was as an assistant in digging out a tunnel under the River Thames. While a tunneling shield designed by his father prevented cave-ins, it wasn't able to stop flooding, which killed several workers and badly injured Brunel.

Before construction on that finished, however, Brunel was appointed as chief engineer of the Great Western Railway company, something that would result in great achievements - among them the two-mile long Box Tunnel, one of the longest of its day. This propelled him into becoming one of the foremost figures of his day.